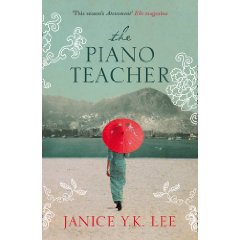 I kept this one in a brown paper bag when I was on the train. It’s a book group read and I must say it’s the first time I’ve read a book that has a glowing endorsement from Elle magazine splashed all over the cover. Oh the shame.

This pretends to be two stories about Hong Kong, during and after the war. One thread follows Claire in the early 1950’s as she comes to terms with her marriage of convenience in the new surroundings her husband Martin has been posted to. The second story takes place ten years earlier and follows Will during the lead up to and the actual Japanese occupation during the second world war.

It’s one of those novels that uses the jumping around between two periods/stories to make it more interesting but in this instance it doesn’t really work. It stays in one period for a very long chunk of the book and then drops you back to the 1950’s just at the wrong time.

When we discussed it at our February book group, a lot of us had trouble with the character Claire and her motivations. This kind of book is really about the rich and vibrant locale it is set in but it lives and dies by how believable it’s characters are and in this instance, the main female lead is unfortunately paper thin.

The Japanese occupation of Hong Kong was brutal and this is communicated pretty effectively by the author- the dissonance between the high society parties and the socialites getting their fingers broken one by one is stark. But overall it tries too hard- Will is supposed to be an enigma to Claire, he’s not particularly enigmatic, just rude. Claires supposed to be be this blossoming prude who flowers in the hot climate of Hong Kong, but she isn’t written with any sort of conviction unfortunately.

Having said that, my wife has picked it up and is currently hooked on it, so perhaps Elle has the right of it and I’m entirely wrong 🙂

The Amityville Horror by Jay Anson

Against All Things Ending: The Final Chronicles of Thomas Covenant, Stephen Donaldson
This entry was posted in Books, Other. Bookmark the permalink.