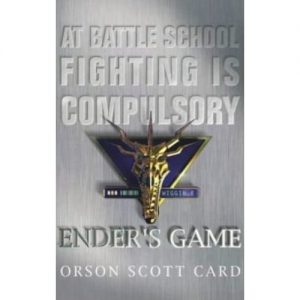 Ender’s Game was written by an author who has a bit of notoriety for his views on homosexuality as much as he is known for his writing. I’ve no particular interest in the personal life of authors or musicians, Scott Card is a Mormon and some of their views don’t agree with my views (on life generally as well as Christianity) but that doesn’t really stop me enjoying a good read.

And Ender’s Game is a very good read. It details the experience of a group of hyper intelligent children, including the eponymous Ender Wiggins, who are recruited by the military to be trained as leaders for use in the inter stellar war with an insectoid race know as the “buggers”.  It’s intelligently written, deals with the violence and ruthlessness needed to be a keen military mind but above all it deals with the action in a pretty exciting and vivid manner.

It was originally written as a short story in the late 70’s, turned into a novel in the mid 80’s and revised for political sense in about 1991 (I think). Great books work regardless of when they’re written, popular webcomic xkcd has name checked it a couple of times, and thanks to the upates, its not really aged.

I loved it and I know I was in a minority for liking the sequels too. For as action orientated as Ender’s Game is, the sequel Speaker of the Dead isn’t. It is thoughtful, talky and contemplative, almost philosophical and still a bloody good read. Orson Scott Card has written an awful lot of science fiction so it’s difficult to know where to start, so to that end, this is probably the place to start.

Eye of the World Unabridged CD
This entry was posted in Books, Other. Bookmark the permalink.