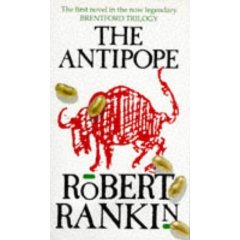 The Antipope is probably unlike any other book you will have read. Robert Rankin himself was awesomely described as The drinking mans HG Wells by some august publication or other (it might have been Time Out, I can’t be bothered to get up and dig out a book to check).

It’s an apt description to some degree but also does the man no favours. I remember reading he was mortified to know having a strap line from Pratchett was the best way to increase sales but I digress.

Mr Rankin portrays himself as a teller of tall tales and this is the first of them. A common locale for his stories is the London borough of Brentford (it hosts the Olympic games, and is apparently the site for the Garden of Eden amongst other things), in an indeterminate time period that has some modern technology but uses pre decimal coinage.

Ostensibly the book follows the exploits of two gentlemen of the parish, John Omally and James Pooley. They are the sort of gents who put more effort into not having a job than they would put into actually having a job. I have a mental picture of a sort of Lovejoy/Tinker set up without the antiques.  And with more drinking.

Rankin wrote a lot of his early books in the pub in spiral bound notebooks. He’d know he’d written enough for a novel when he’d filled a certain number of notebooks. This shows through in his writing, he has no love for computers, mobile phones or video games.

Whilst he might not love the modern, his clear affection for traditional drinking culture and the workings of the saloon bar. I’ve sat in a number of pubs in my time and Rankin captures the atmosphere so perfectly, even Inspector Morse wouldn’t be able to detect a problem.

The juxtaposition of the ordinary and the extra ordinary is dealt with in a very charming manner. Brentford has its own Gandalf figure in Professor Slocombe who introduces the arcane nicely.

This is probably one of my favourite reads and one of Rankin’s most accessible. Some of his later books don’t so much breech the 4th wall, as knock it down an rebuild it as a barbecue. The first three Brentford books, the Aramgeddon books and the Cornelius Murphy trilogy are all completely accessible to newbies and I would really recommend you give him a go.

The 100 Book Challenge
This entry was posted in Books, Other. Bookmark the permalink.