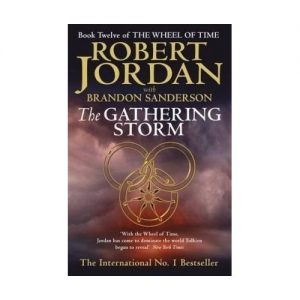 As I mentioned in my previous post, this book rattles along at a fair old rate, a rate that the series hasn’t really managed since the first four or five volumes.

Things have been moving slowly in the last few volumes of the Wheel of Time. This is the third volume after the cleansing of Saidin, and in the interim not a great deal has happened. It’s taken two volumes of Matt to court and marry Tuon, it’s taken as long for Perrin to rescue Faile and let’s not forget that Egwene has been besieging the White Tower for longer than most trilogies run to. The loss of Rand’s hand and the capture of Semirhage at the end of Knife of Dreams are about the only real thing of note.

This has changed fairly dramatically with The Gathering Storm. Brandon Sanderson has gone into a fair amount of detail on his blog about the decision to split what was going to be the final volume into three books and I must say I agreed with them before reading the book. I’ve been reading George RR Martin’s Song of Ice and Fire series since he began writing it and he’s obviously suffering from a similar problem in that his characters have spread themselves to the four corners of the globe (metaphorically) and bringing them all together in a realistic and rational way is proving very difficult. The lastest volume, which in itself is a butchered half of the last volume, is still on schedule to be at least 3 years late.

The pace in The Gathering Storm should be relentless but it isn’t. There is a good amount of texture in the pacing that benefits the novel dramatically but my word, there is certainly some major events occuring:

In fact I think the only real issue that hasn’t been dealt with is Matt and Thom’s excursion to the Tower of Genji to resuce Morraine. Frankly if that happened in this volume, there would be too much going on.

What is interesting with Rand using the True Source, perhaps the event that has the most ramifications and is the most unexpected, happens so early in the book. There are some serious questions it poses- is the Dark One setting Rand up to replace him? Will the Dark Ones taint turn Rand? Will he get addicted to it? Will he develop the saa that Moridin has? Will Rand be more and more tempted to use it over the one source because of the nausea embracing the one power gives him? As Rand tries to make himself harder to deal with the struggle he sees that he faces, you can’t help but see the Emperor’s attempts to turn Luke Skywalker in it all- by trying to save all that he holds dear, will Rand become what he hates?

To me this is the most important part of the book- a lot of the other key plot points involve the resolution of existing plot arcs, aside from the destruction of the Choedan Kal at least (probably as wise move as it seems to be a bit of a deus ex machina weapon to me), but the True Source is a real unexpected leftfield development.

Personally I can’t wait to see where it goes.

Sanderson’s writing style is a good fit to the Wheel of Time universe. The characters continue to act and behave in the way that the reader is used to. Sanderson has done an astonishing good turn and continuing a series that has progressed so far. In fact I do wonder that without the baggage of writing the previous 11 volumes, if Sanderson has actually done a better job that Jordan could have. Don’t get me wrong, the scope of the vision Jordan had for the Wheel of Time has been immense but he’s had real trouble progressing the story in  the last few books.

Towers of Midnight, Near Avendesora and Court of the Sun analysis , Robert Jordan & Brandon Sanderson.
This entry was posted in Books, Other. Bookmark the permalink.