There’s a big spread in the news review section of the Sunday TImes today about Game of Thrones, the TV show, and also A Song of Ice and Fire, the book series the TV show is based on. It could be interesting but the first paragraph gave it away- it isn’t and it treads all the same tired narrative that did the rounds when Harry Potter came out. 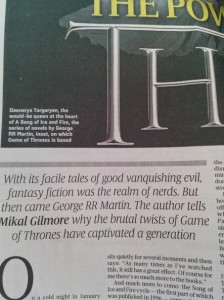 Tired comments on Game of Thrones

I read with weary acceptance that fantasy was full of “facile tales of good vanquishing evil” back in 1996. Odd that, especially given that the previous year  Robin Hobb’s Farseer Trilogy begun with Assassin’s Apprentice, a series that focused around a court assassin which definitely didn’t follow a facile tale of good versus evil. Of course that was only one of the most recent series that kept the genre vital. Since the late 70’s Stephen Donaldson’s repugnant anti hero Thomas Covenant had been keeping the genre honest and the readers repulsed. I could prepare an extensive list but suffice to say, this sort of journalism is just plain lazy and smacks of the fawning over JK “I didn’t realise it was fantasy” Rowling back in 2005:

“…Rowling reinvented fantasy fiction, which was previously stuck in “an idealised, romanticised, pseudofeudal world, where knights and ladies morris-dance to Greensleeves”.

Thank you Time magazine. That was tired old rubbish nearly ten years ago, so for the Sunday TImes to trot it out in this day and age is unforgivable. Sci-fi/Fantasy is the second biggest fiction genre in terms of sales after crime (and ahead of romance), so it’s sad to see it treated so poorly treated.

Mindless (access to) violence
This entry was posted in Blog. Bookmark the permalink.