Predator: a reboot too far

Reboot is the new word for remake because remaking classic films shows a creative bankruptcy doesn’t it? Rebooting a film (or more likely a franchise) allows for a loose reinterpretation of the original for modern fans. Sony rebooted Spider-Man after a rather disastrous third outing with Toby Maguire, to give it a tone more appealing to the Twilight brigade, and that gives a fairly good indication of the why’s. 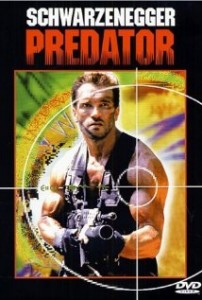 We’ve also had a reboot of the Robocop franchise recently, seeing the biting satire and extreme violence of Paul Verhoven’s original watered down into a 12A action film that sort of misses the point. It’s enjoyable in isolation but if you’ve seen the original, it doesn’t sit well.

But Predator? How can they reboot Predator? Predator was released in 1987, and running to 107 minutes, it was long for an action film at the time. Coming towards the end of the 80’s, we’d already seen the majority of the testosterone fuelled 80’s muscle men movies by this point but Predator was the perfect storm of action, special effects and fun. It is in many ways the perfect film inasmuch as a remake cannot improve it.

There are so many great moments in the film, that sees a group of Special Ops mercenaries lead by Arnie’s Dutch head to the South American jungle ostensibly to rescue survivors of a helicopter crash that it’s hard to know where to start. Blain and his General Electric Minigun still live on in the conciousness of many 30 somethings, as does his response to being told he’s cut and bleeding- “I ain’t got time to bleed”- or Billy the Indian tracker dropping all his weapons to fight the Predator on the bridge armed only with a knife because that’s what mystic Indians do, the list is endless. And the effects are brilliant too, especially considering it’s a pre CGI world.

Of course all this will be lost in a reboot. There will be a team of thin and pale mercenaries with strangely futuristic weapons that make plinky noises for no discernible reason. The action sequences will be chaotic but somehow detached because of the unnatural CGI camera angles and proliferation of green screen work and of course the violence will be tuned right down to get a 12A certification to bring the film to a whole new generation of fans or some such codswallop. The overblown machismo will completely be lost and the humour will be jettisoned.

In short, it will be a disaster, and a disaster that even Shane Black, returning to direct after starring in the original as Hawkins, will not be able to mitigate.

Last and first film of the- Expendables & Inception
This entry was posted in Blog. Bookmark the permalink.