Why politicians shouldn’t use Google+ 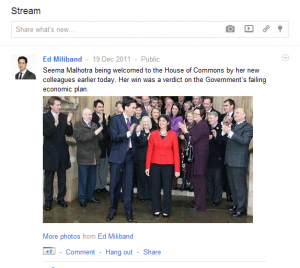 “Her win was a verdict on the Government’s failing economic plan.”

Oh dear. That kind of soundbite comment is easy to make on the telly or in a press release but the wonders of social media and the right to reply immediately sort of make you look stupid when what you say is, well, stupid.

Out of the 30 replies to the post, these are some of the more amusing:-

28 of the last 37 years the constituency returned a Labour MP. And they’ve held the seat since 1992. That’s hardly “a verdict on the Government’s failing economic plan.”, that’s a bunch of Labour voters voting for the Labour candidate like they have in the last 5 general elections.

Or from one of our Antipodean friends:

I’m an Australian, so forgive me if I missed something, but if I got this right.
1. a by-election was called when 73 year old MP Alan Keen lost a battle with cancer.
2. Alan Keen was a labour politician
3. The seat of Feltham & Heston was a safe labour seat.
4. The labour vote went up by 1,500 votes.
5. A new labour politician took over a safe seat from an old labour politician.

Final word on the subject to Jon, who thinks Labour’s Leader is selling the winner short:

It is a pity that the leader of her own party can not congratulate her on winning for her own merits but puts her win down to others. Maybe he has no real confidence in her? But he did manage to get in another boring soundbite.

Of course it’s not Milliband actually writing the soundbites that get posted on G+. it’s probably a very junior member of his spin team that doesn’t understand social media. Or at least the important part, the interaction.

Plan UK: Because I am a Girl Campaign #FGMrose

Fire at Batchwood sports centre, St Albans
This entry was posted in Other. Bookmark the permalink.