Some more mainstream media reports of the fire at Batchwood sports centre are now surfacing:

Over night Batchwood sports centre in St Albans, Herts, pretty much burnt down. There is an adjacent nightclub and since the statement on the local council website says nobody was hurt, at this stage it seems plausible to assume the fire started after the club had closed for the night. The fire is not thought at this stage to be linked to any of the ongoing rioting around the country.

Batchwoods is set well back from the road so there shouldn’t be any additional disturbance other than the ongoing roadworks by the entrance.

The council press release is on their site, which is being updated as new information comes in. Tune in to our local community radio station, Radio Verulam, throughout the day for updates.

There appears to be some worry in the community, the chip shop on Catherine St is closed with the following message:

I’ve done this post because aside from social media (Twitter) there is nothing showing on the internet for the story at the moment.

Probably not worth looking at the Herts Advertiser though, as of 8.15am this was their front page: 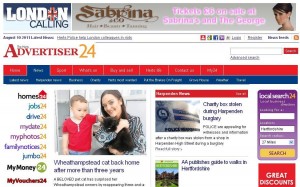 At least the cat is safe

EA Sports Active review
This entry was posted in Other. Bookmark the permalink.