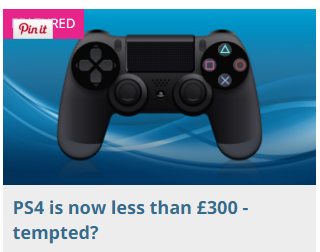 The press is full of “stories” over Sony cutting the price of the PS4 to £299.99. It’s a fifty quid cut from a RRP of £349.99, and therefore newsworthy, aside from the fact that RRP and the on the street price haven’t borne much relation for a very long time. How long? Well back in January I turned 40 and treated myself to a PS4. It cost me £246.

When I bought my PS4 I did get lucky; I don’t think I’ve seen them before £250 since but I’ve seen them between £250 and £260 for a standalone console fairly regularly. Regularly enough that if I didn’t already own one, I’d wait until I spotted one at that price before buying. As it stands, prior to the price cut, you could already get retailer made bundles with 3 games for £300, which is pretty good going, and as recently as last week Simply Games were selling 1TB PS4’s for £259.99 if you fancied a white console.

So what will the price cut mean to consumers? There are three possible outcomes:

Personally I’d love to see the latter. PS4 sales have been great so far but a sub £200 retail price. I know the sales for PS4 and XB1 are rosy, they’re up a good 40% on where they were with the previous gen at this stage in the consoles life but it would be good if the momentum wasn’t lost- the better this gen does, the more ambitious the manufacturers are likely to be for a fifth outing…

A guide for Arsenal in the transfer market #AFC
This entry was posted in Blog. Bookmark the permalink.