Last year I was lucky enough to get a blogger invite to the Volvo S60 Naughty Track Day. I’d always known there were fast Volvo’s. Even in my lifetime I’d quietly lusted over the V70 T5 as a result of a Volvo estate being entered in the British touring cars in the 90’s. Of course if you look back further in history, the Volvo P1800 was a rather lovely sports car and it’s the estate version of this that’s widely considered to have inspired the design of the current C30.

I wasn’t thinking much of the C30 as I threw the all wheel drive 300bhp S60 T6 round a test track, and I certainly wasn’t thinking of anything above keeping my dinner down when GT driver Tommy Erdos hurled me round the Top Gear test track in a S60 D3. The speed was astonishing, not least because we seemed to do most of the 4 laps sideways.

My dad’s currently got a C30 1.6D DRIVe, which in terms of performance is a bit of a drop for him after his two previous cars, a Honda Civic Type R and a Mazda MX5 1.8i. Ever since he retired my dad’s had a range of fairly quick cars. He started off with a vintage 1300cc MG Midget Mark III, which was light as hell and if it didn’t go like stink (a 0-60 of 14 seconds suggests it didn’t), it felt like it did as you were about 2 inches off the tarmac. As long as it was dry and you didn’t accidently nudge the switch on the dash which turned the fuel pump off, it was great.

He doesn’t watch Top Gear because he thinks Clarkson embodies everything that is wrong with the world today but if he did, lordy, the other weeks episode would have had him punching the air in excitement. 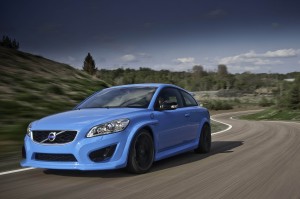 After running a Cosworth tuned Subaru Impreza through it’s paces and showing it comprehensively outdone by a Ford Focus RS, they wheeled out the Volvo C30 Polestar concept car. Which comprehensively demolished both of the other cars in a straight line drag. Obviously the 4 wheel drive gave it better traction than the Ford but the turbo lag on the Subaru meant that was a distant last. And neither of these cars are slow, that’s the astonishing thing. Volvo really really really know how to make a seriously quick car.

Unlike a lot of other concept cars, it actually still retains a lot of the design looks of the car it’s based on. I’m sure a boffin could tell me that it shares x% of body panels with the road car but that’s not really the point; it still looks like a C30. Even if the colour is a bit suspect 🙂

Volvo currently have no plans to turn this into a production model, which is a crying shame in my book. I’ve always like the quirky retro look of the the C30 and a serious proper (molten) hot hatch version would seriously rock.

Of course, no matter the cost I wouldn’t be able to afford it but that’s not really the point. Just knowing it exists would be enough.

This entry was posted in Other. Bookmark the permalink.