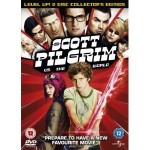 The other night we watched the 2010 Edgar Wright film, Scott Pilgrim versus the World and it really made me wonder. My early twenties were nothing like Scott Pilgrim or his hipster friends; I wasn’t cool in a nerd way, didn’t play an instrument and definitely didn’t live in Canada. In fact, if you go back to the comic book, Scott Pilgrim, that the film was based on, I was 29 when that came out, so it was a generation different anyway.

What the film did do well was generate such an evocation of youth. Particularly with all the video game pinging and imagery. I was a bit gamer in my youth. To say the least. I didn’t have a particularly interesting or awesome childhood, there’s certainly not a lot there I ache to return to. I was shy, awkward, and more comfortable on my own than with other people. I liked escapism, comics, books, video games and the like, anything that put me somewhere else and as someone else.

So now I’m 36, married to a lovely lady and I have two smashing kids, which is a big improvement on anything from my early twenties or late teens by any marker you’d care to use. And I am happy, even though the kids drive me bonkers at times, and there never seems to be any time to do anything at a time when I’m not knackered from doing anything else. I think whats got me feeling all melancholy can be summed up nicely by a line from Pink Floyd’s Time: “And then one day you find ten years have got behind you, no one told you when to run, you missed the starting gun.”

I’m happy where I am now, and I’m happy how I’ve got here but Scott Pilgrim has made me think I should have had more fun getting here.

Mindless (access to) violence
This entry was posted in Other. Bookmark the permalink.