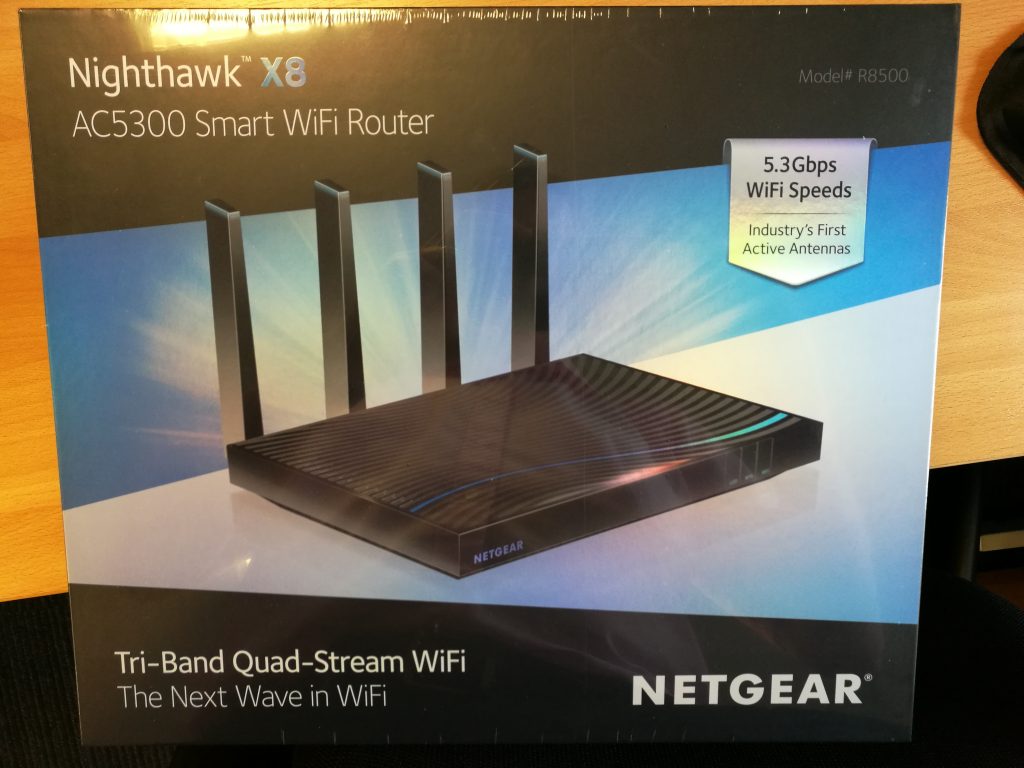 Netgear have lent me a  Nighthawk R8500, a tri-band quad stream WiFi router. At this point I don’t know what that means but it looks like something the Shadows from Babylon 5 might have made, so it’s all good.

Normally I don’t accept stuff for loan, the time and effort that goes into testing it properly often exceeds what I’m prepared to do for nothing but I thought I’d make an exception in this case for two reasons.

Firstly the Nighthawk has an RRP of a whopping £399.99, so I can forgive Netgear not simply dropping one on me for nothing.

Secondly, I’m really interested in seeing what a top end domestic router can do for our home. While we have an awful lot of connected devices, I don’t think we’re exceptionally abnormal in today’s connected home environment:

Hmmm, listing them out like that makes it look a lot worse than it is. Basically, every telly has a FireTV on it, and most have a console or two by them. The sitting room has my gaming PC in it too (i5 & GTX 980 based Node 304 if you’re interested). My wife and I have a laptop each, there’s a AIO in the dining room for the kids to do homework/play Minecraft on, and a cheap laptop for whichever child isn’t on the PC to use (the only time a child wants to use the computer is when another child is using the computer. Obviously).

The NAS boxes have a combination of ripped CDs, ripped DVDs (all now in the loft), backed up photos, home video and various other stuff I’m too paranoid of HDD failure to just leave on a computer.

Our sitting room is wired to the router. Our study and bedroom our wired to the gigabit switch in the sitting room. Further, our bedroom has an ASUS WiFi router in access point mode, and the playroom has a wired connection via homeplug.

The WiFi network is often congested as the security cameras are motion activated and upload clips to Google Drive. The Ethernet network is often slower than the gigabit switches allow for, and I’ve vaguely assumed this is down to the Virgin Super Hub 2 simply failing to keep up with everything that’s connected to it and demanding either internal bandwidth or an internet connection. With VM bumping our connection to 200Mbps, I’d like to let the Super Hub just deal with that and nothing else, so I’m cloning the SSID to the Netgear, and going to put the Super Hub in “modem” mode for the next three weeks.

I’ll let you know how I get on.

3 MiFi Review
This entry was posted in Technology. Bookmark the permalink.