I was reading this blog post on talking about money in relation blogging and being a woman earlier today and decided to comment on one specific part (the fact that us Brit’s don’ talk about money): 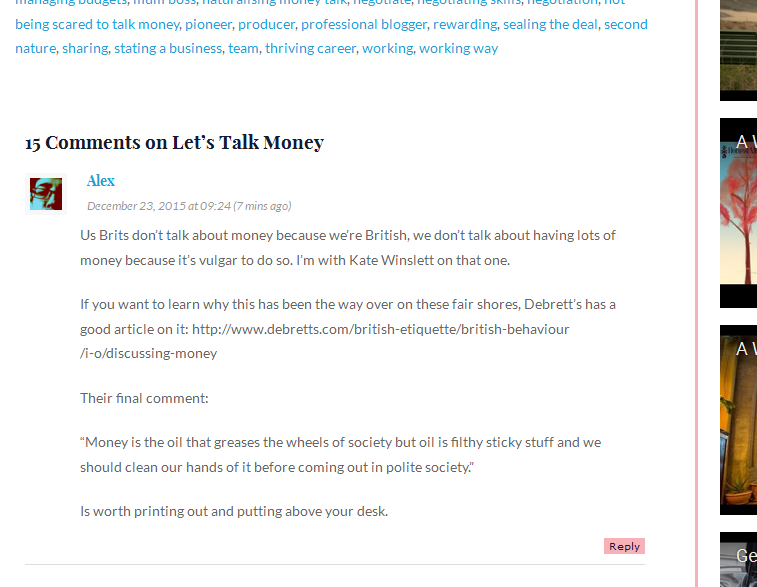 I wasn’t enormously surprised to see that it was swiftly deleted:

Comments at 9:38, last comment posted an hour ago, well after mine

That’s okay though, I’ve had enough comments deleted across enough blogs to always cut and paste the text as a bare minimum and I tend to put them into a blog post so I at least have some sort of right to reply.

If you can’t make out the text in the screen capture, here it is again:

If you want to learn why this has been the way over on these fair shores, Debrett’s has a good article on it: http://www.debretts.com/british-etiquette/british-behaviour/i-o/discussing-money

“Money is the oil that greases the wheels of society but oil is filthy sticky stuff and we should clean our hands of it before coming out in polite society.”

Is worth printing out and putting above your desk.

I’ll admit the first sentence is a little grammatically confused and perhaps the final comment is (a bit) inflammatory but my point really still stands. Sometimes I can’t help myself and you’ll have to forgive me on that one.

I think the rest of the post, specifically those parts that talk about women freelancers in the blogging world having to:

….pause before asking about budgets, what fees are on offer for freelance work, whether there’s more in the pot-we worry we’ll be regarded too forward, too presumptuous, to ask for what we feel we are worth.

are equally relevant to men. Maybe in terms of lifestyle and parent blogging even more relevant, as men are a very small minority (one directory reckons 8% of their parent blogger membership is male, that’s a very small number). In essence, I have no issues with the overwhelming problem of the gender pay gap in society in general but would take issue with the simple transfer of this problem on to blogging and earning an income from blogging. To my mind it’s a non sequitur or a logical fallacy.

Personally I think it’s the same for the vast majority of people put into the position of being asked “what they would charge” to either post something, endorse something or attend something simply because they write a blog. Gender and gender politics have relatively little to do with it.

From a personal perspective, I’m fortunate that I’m unlikely to ever have to rely on blogging as my main source of income, as I have a degree and a professional qualification that sees me earn a good salary. So I can ask for payment for placed content to cover website hosting costs (I have 5 hosting packages across 4 hosting companies) or domain name renewals (I’ve got over 30 that I’ve somehow accumulated) but I don’t have the issue of worrying that if I don’t get enough, I might not be able to meet the bills.

Ironically the last person I spoke to who was in that situation was a dad blogger. He’d just packed up his full time job because it was making him ill and had switched to freelancing “full time”. You know what? His worries and concerns were exactly the same.

Blogging/social media dirty tricks
This entry was posted in Other. Bookmark the permalink.