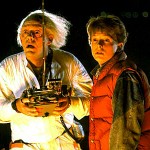 Boffins have recently entered an excited state (see what I did there science fans?) about some neutrinos that appear to have travelled faster than light. Prior to this the fastest thing in the uniververse was thought to be the speed of light, followed closely by a New York Second*.

Complicated theoretical physics has always fascinated me, for example did you know there are 6 flavours of quark (elementary particles that eventually form the components of atomic nuclei)? And that some of those flavours are called strange, charm and bottom? I’m not bright enough to understand a lot of it and what I do understand I often don’t remember; after all remembering amusing lines from Ghostbusters is probably going to be of more use to me on a day to day basis.

Time travel is something that has always interested me though, from my youth as a Doctor Who obsessive (weaned on Tom Baker, and a stalwart through the decline that lead to the cancellation of the show), through to Terminator (II) and on to that sort of thick sci fi tome that has a bit more thought in it than TV centric stuff. Of course, if you live in China, any attempt to watch a film about time travelling will see you arrested. The Chinese authorities are pretending its to do with altering the history they’ve decreed but there’s part of me that secretly hopes they’re on their way to the Peoples Democratic Republics Time Machine.

Relativistic effects of travelling at speeds close to the speed of light are now a bit old hat in sci fi (John Scalzi deals with them very well in his Old Mans War series though), and there’s only so many times I can see people go on a long trip and come home centuries/millenia afterwards without getting bored.

The best implementation I’ve come across probably involved the use of worm holes and wasn’t by any means central to the plot. In Peter F Hamiltons Commonwealth Saga, the Commonwealth had to evacuate whole planets of people due to a war. In order to allow them time to prepare for their arrival, they tinkered with the exotic engery matrices (or something) of the wormholes to mean that the people popped out the other end decades after they went in. That’s an innovative way of time travelling in my book.

Of course most people are interested in travelling in the other direction- backwards in time. I have an idea for a very complicated book based around this ideal and the effects it has on causality but it’s beyond me.

I did however manage to confound a magician the other day with my thoughts on time travel. He did a card trick that involved a bit of “time travelling”. I told him I was unimpressed, I time travelled all the time. True, I only tend to travel through time in a forwards direction, with a mapping of 1 time travelling second to 1 actual second, so the effect is pretty imperceptible but it is time travelling none the less. He wasn’t impressed but is following me on twitter now. If his conjurations work, I may have made a powerful enemy.

*the interval between the lights turning green and the taxi behind you standing on it’s horn.

Honda-tastic
This entry was posted in Other. Bookmark the permalink.