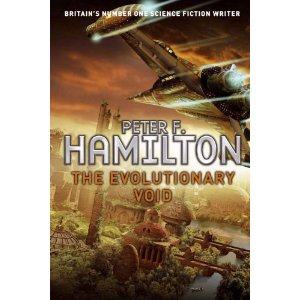 The Evolutionary Void by Peter F Hamilton arrived in the post yesterday. It’s the third and final volume in the Void series, which is itself a sequel to the Commonwealth Saga.

The second volume contained an awful lot of Edeard in the Void and Hamilton has promised the third volume will be more rooted in the Commonwealth. So far this seems to be bearing up, I’m 200 odd pages in and whilst we have been into the void a few times, it’s mostly be for small parts of chapters, rather than a hundred or so pages at a time.

It’s definitely a case of so far so good. I was very disappointed with the way the final book of the Commonwealth Saga panned out, Judas Unchained went a bit Keystone Cops with a car chase and the Planet’s Revenge was just, well, silly. I have hopes with an extra volume in this series things will be concluded to a more satisfactory degree.

The weapons and spacecraft are beginning to get interesting too. The Navy Deterrent Fleet and the Accelerator Ship are both examples of some left-field thinking at the extreme end of where Hamilton’s sci fi has gone before. I approve of this since I was a little disappointed by the appearance of ultra drives over hyper drives and (random letter)-sinks in the previous books. We’re not talking about flying trees here, so Dan Simmons has nothing to worry about, but it is a new direction for Hamilton.

I’ve around 500 pages to go, the view is positive so far, expect a review by the weekend all things being equal.

Amazon pricing for the Evolutionary Void by Peter F Hamilton

Against All Things Ending: The Final Chronicles of Thomas Covenant, Stephen Donaldson

Wormholes: when your brain won’t stop ticking over
This entry was posted in Books, Other. Bookmark the permalink.