The Orange San Francisco is a bit of an eye opener on several levels. For starters it’s a PAYG smartphone, something that is still a bit rare even today but perhaps more importantly it’s not a hamstrung pile of crap. 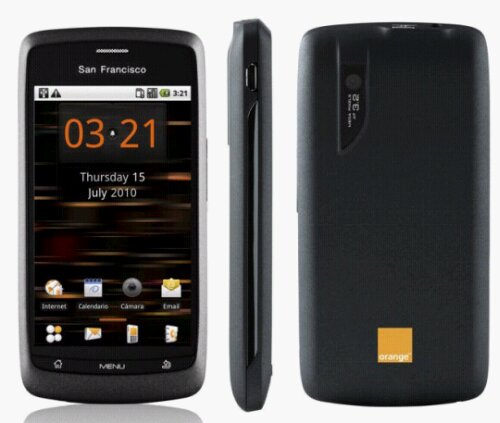 The problem with budget smartphones tends to be twofold. Firstly they tend to have cheaper resistive touchscreens. This means that unlike the iPhone and other higher end devices, the screen has a membrane over it that responds to pressure. Traditionally these have required a stylus (pen like prodding stick) to tap and don’t really cut the mustard in today’s market. Secondly they’re often hamstrung by a low resolution screen and a slow processor. Obviously for the price of a budget phone, you’re not going to get a display like the retina display on the iPhone 4 but there is such a thing as a false economy and a lot of budget smartphones are just that.

From the moment you open the box and lift out the San Francisco, it’s obvious it’s a bit special compared to it’s peers. The phone itself feels very solid. Not Nokia N8 solid, or iPhone solid but solid for something that costs about a quarter of the price of either of those smartphones. The back comes off to fit the battery and sim card easily and goes back on snugly too. I noticed a user replaceable 2gig microSD card too, which was nice.

Spec wise it has a lot of features you’d expect to see on a much higher priced device:

Despite not having an uber fast processor, the San Francisco zipped through most of the things I’d do on my iPhone 3GS in short order. Since it uses the Android operating system (version 2.1 at the moment), it should be familiar enough to anyone who has used a smartphone before. I certainly found it a heck of a lot more intuitive than Simbian ^3 on the Nokia N8 in terms of initial set up I must say.

Getting it on the wifi, setting up email, twitter and facebook were really easy, as was customising the home screen. Even charging it was good; I liked the way the wall plug adaptor had a detachable standard USB cable as part of it.

The real bonus with the San Francisco however doesn’t come from the operating system or anything like that, it comes from how easy it is to unlock the phone so it will work on any network. All you have to do is enter the IMEI number, which is on the box, select ZTE, leave the model as the ZTE Bluebelt and click away here (*disclaimer: although it worked for me, it may not work for you and I accept no responsibility for a broken phone should you click through).

The ease of unlocking makes it an ideal phone for those people that already have a contract but want something affordable to replace an ageing or broken smartphone. You can even keep the Orange PAYG sim card and pop it in when you want to take advantage of Orange Wednesday deals (lets face it, a couple of trips to the cinema on a two for one will cover the £10 top up you have to buy the phone with in short order).

The Orange San Francisco is £99 +£10 for top ups directly from Orange at the moment, and is really a bit of a steal. I don’t think I’ve been as impressed with anything at this price for a very long time.

Cartons of Drink
This entry was posted in Reviews. Bookmark the permalink.