We fly the British flag, not these awful things

By the time 1997 rolled around Margaret Thatcher hadn’t been the PM for 7 years and was now a Baroness. Although it must be said she staunchly demanded people called her “Lady Thatcher” and not “Baroness Thatcher” because Baroness was a German title. The signs of being a bit doo-lally were already evident when she attended the unveiling of British Airways new livery designs for it’s aircraft, specifically the tailfins. The BA tailfin had been iconic, the Union Jack, and the new ethnic designs intended to resonate with international travellers, didn’t go down well.

Seeing Arsene Wenger’s last two pre match press conferences has me a little worried. Is he heading down the Baroness Thatcher path to being a bit mad? A man who said on 12 August, despite all evidence to the contrary, “I expect nobody to leave the club“, followed up by “I have not been disappointed by Cesc’s attitude or by Samir Nasri’s. They have been professionals.” and “We will not do Juan Mata”. The icing on the cake was pretty much “Champions are people who do not give in; they continue to fight and believe in their strengths. We have enough strength.” 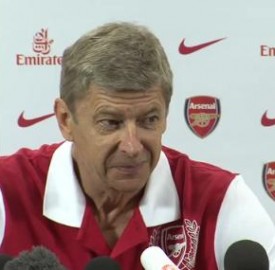 We fly the British flag, not these awful things, wait, non, zat is zee wrong quote

A club that dragged out the sale of it’s prized asset until two weeks prior to deadline day, for the sake of €3-€5m in extra fees that will no doubt be added to whomever Arsene targets as selling clubs will smell the desperation, without strengthening the team in the areas that are notably weak beforehand, looks increasingly clueless in light of Wenger’s baffling comments.

Opta will tell you that Arsenal conceded more goals from set pieces than any other club in the top flight. Vermalen started 5 games last season. He’s fit for now but Wenger seems to be dallying on buying another centre back. So far Roger Johnson as moved for £7m, the defender who Opta will say had the most aerial clearances last season. I’m not suggesting Johnson would have been the answer but Wenger seems to think decent centre backs are as rare as rocking horse shit.

This may be due to his purchases- Cygan, , Senderos and Squillaci aren’t exactly among his finest signings, all displaying a complete lack of pace that has been badly exposed over the years but it’s rapidly becoming apparent that the world is divided into two camps, and Tom Baker summed it up perfectly in Blackadder II:

“Opinion is divided on the subject. Everybody else says you do, I says you don’t.”

Perhaps that’s what happens when you’re in charge for so long. Thatcher had been in office for 11 years when she was unceremoniously booted out from within and Wenger has been in charge at Arsenal much longer than that. But the tunnel vision has been tunnelling more and more in recent years.

The obsession with youth and nothing but youth has somehow forgotten 22 games by a 31 year signing in Davor Suker, the 85 games from a 27 year old signing in Emmanuel Petit and lets not forget that even Robert Pires celebrated his 27th birthday in his first season at Arsenal.

Equally the faith in players that aren’t good enough is baffling, there are almost enough to build an entire team out of if you think about it: Alumnia, Squillaci, Eboue, Diaby, Arshavin, Rosicky and Bendtner are the players that immediately come to mind but I’m sure in an uncharitable moment I could add more (I do have a soft spot for Vela and am hoping against hope he’ll eventually deliver).

When Gazidis promised a busy transfer window, we all had images of the dross being disposed of and quality players being brought in. Fast forward almost 3 months, two of the best players have gone/are going and only Eboue is showing signs of leaving after his medical in Turkey.

And Wenger is blaming the press for turning the fans against him? Come in Mrs Thatcher, your time may soon be up.

A guide for Arsenal in the transfer market #AFC

Scott Pilgrim versus the world and my mid life crisis
This entry was posted in Other. Bookmark the permalink.