I’m still reading Brandon Sanderson’s epic- Christmas got in the way of that one a bit but on the side I’ve been listening to some rather excellent audio books on the way to work. 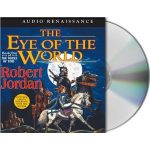 Robert Jordan’s Wheel of Time are available as audio books in unabridged format and they’re rather good. I certainly don’t have the time for a read through of all the books before the final volume is due out in early 2012, so listening to them for the hour or so it takes to walk to and from work in the morning seems an excellent compromise.

It’s interesting to hear the written tics that Jordan has spoken by the two narrators, they sound a lot more irritating than they do on the page. David Langford once described how it invented a drinking game based around Stephen Donaldson’s use of the word “clench” in the Thomas Covenant books that involved two people opening a copy of one of the books and reading until they found the word “clench”, the loser having to have a shot. Well I’m sure you could do that with Jordan if you substituted the word “dryly” for “clench” and if I hear the phrase “‘Ta’veren’, Loial began” one more time I might have to get a bit cross.

Nevertheless, the audiobooks are very good. There are two narrators, a chap who takes the male chapters and a woman who does the female ones. One of the things it deals with nicely is the pronunciation. It’s always a bit tricky with fantasy anyway but given that this is American fantasy read by Americans, a few of the words are pronounced quite differently to how I expected. At around 30 hours for the Eye of the World, which isn’t the longest in the series by any stretch, I think my walks are going to be fairly busy for the next few months.

The Way of Kings: The Stormlight Archive by Brandon Sanderson

Against All Things Ending: The Final Chronicles of Thomas Covenant, Stephen Donaldson
This entry was posted in Books, Other. Bookmark the permalink.