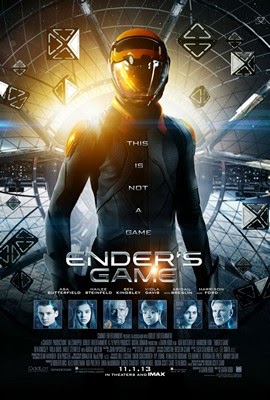 Ender’s Game is one of those difficult to review book to film adaptations. The book is fairly old now but received a lot of plaudits and awards when it was originally published in 1985, and whilst not long by modern doorstop fiction standards, it is long enough to require serious abridging and adaptation in order to bring it to the screen. A successful book adaptation hinges on how intelligent the decisions in this process are made, both from the context of it being a good representation to fans of the book and how it stands as a film in it’s own right.

For all their failings, I enjoyed the Harry Potter films as someone who hasn’t read the books, so from that perspective those films worked well. I obviously can’t comment from any other viewpoint.

In reviewing Ender’s Game, it’s interesting to take a little history lesson first. The story that eventually became the novel Ender’s Game started out as a short story in 1977 about battle school and specifically the “game“- a team sport in zero gravity designed to work on teamwork skills, strategy and to give participants an idea of what battle in zero G (where there is no “up” or “down”) actually works. Scott Card rewrote it into the long form novel when he realised it had the scope to be part of something larger. So in this context the subtleties of Battle School and the game are right at the heart of the writing the film is based on.

Obviously adapting a novel into two hours of motion picture requires a lot of material to be cut and this is perhaps one of the main problems with the movie Ender’s Game. Like a lot of better sci-fi, at heart Ender’s Game is about relationships in a more advanced technological society. Obviously there are spaceships and battles but these aid the story and are not at the expense of it. This may be why it has taken such a long time for a movie adaptation to be attempted; cinema audiences want spaceships, explosions and excitement from their sci-fi. Blame George Lucas for that one.

The first major departure is the age of  Ender Wiggin. In the novel he is 6 and that simply wouldn’t have been feasible in a film adaptation so he’s bumped by ten years to 16. I have no issue with this, it makes some of the vulnerability of Ender less dramatic but at the same time he looks a fairly weedy specimen, so there is no real problem.

There are scenes and sequences that someone familiar with the book will recognise in the film but they are generally shorn of their meaning or context by the truncation of the interpersonal relationships between the major players. For instance, there is no clear reason why Petra befriends Wiggin in the film, the viewer just has to assume she likes him because it doesn’t make sense otherwise. Ben Kingsley’s Mazor Rackham is equally baffling in his behaviour because it is shorn of context.

Obviously the first thing to be jettisoned in the adaptation was the entire socio/political machinations of Peter and Valentine Wiggin. That makes sense but it simply reduces Peter to the level of petty bully which makes it harder to understand why Ender behaves in the way he does when faced with violence. At it’s heart the novel isn’t a book about big space battles, it’s a novel about more philosophical concepts, something which the other books in the series, particularly the excellent direct sequel Speaker for the Dead pick up on.

So Ender’s Game fails as an adaptation of the novel. That in itself is hardly anything new, there are plenty of people that don’t like the Lord of the Ring adaptations, but how does it fair as a stand alone movie?

Although some reference is made via the emails that Ender’s’s sends Valentine to the amount of time that has passed at Battle School, this is the only real indication that Ender has really been there for more than 5 minutes. Again the feeling of compression makes it harder to understand the crisis point Ender reaches when he inadvertently puts another of the boys in a coma.

The space battles however are dealt with excellently and convey a real feeling of urgency and excitement. The big reveal is hinted at quite openly but nevertheless did surprise my wife (who hasn’t read the book). This is the easiest part of any science fiction adaptation to get right however. The “game” looked great but failed to impart the reasoning behind it and the fundamental differences Enders made to it and how it raised him above the crowd.

Over all then, I would have to say that Ender’s Game is an complete failure as an adaptation of the book, and a marginal failure as a film in it’s own right. In an attempt to retain key elements of the book, the coherency of the film as a standalone product has been too heavily compromised.