A good pair of cans

I love listening to music. Okay, you might have seen my post extolling the virtues of the KLF and be thinking, what is this loony on about? but bear with me.

The Loudness War is already ruining a lot of new music and released old stuff without you even realising it. Bummer eh? Not that it matters if you use the bundled pair of earphones that came with your MP3 player though. 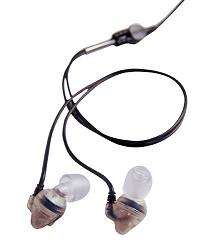 Around 5 years ago I bought a pair of Shure EC2’s for about 50 quid to go with my iRiver H140 MP3 player. I don’t think I’ve listened to music in the same way ever since. There were albums I’d had for years that I was hearing new things on, percussion, snare drums, cymbals and multi-tracked vocals that was lost with crappy headphones. What a bloody waste!

And now I’m in danger of going back to the waste. The cables have finally snapped on my EC2’s and my back up pair of Shure SE115’s have come into play.

They’re supposedly a £80 pair of ear raping earphones (the EC2’s had an RRP in  excess of £100) but I got them for £17.99 from Play.com in a sale a couple of years ago. I’m sure they sound good but going straight to them from my EC2’s, they sound terrible; muffled and tinny at the same time. I’ve got a pair of Altec Lansing cushioned over the ear headphones too but all they seem to do is bass, All Along The Watchtower is currently playing and it sounds like drum & bass.

I’m sure there are other manufacturers that churn out reasonable products but Skullcandy seem to just focus on garish designs, the one pair of Sennheisers I had were terrible in both sound and build quality, and I’ll never earn enough to be able to afford a pair of Grados. My ears were opened by Shure and I have a certain amount of brand loyalty as a result.

It’s a shame Shure stopped making the EC2’s really. I’ve spotted they’ve got a similar priced product out in a while in the SE215’s. I’m waiting with trepidation to see if these are any cop because every day that passes, my ears are forgetting how great music can sound.

Sunday Night Music: KLF
This entry was posted in Technology. Bookmark the permalink.